The first thing you see coming into my small town in rural Oklahoma is a smokestack. The smokestack is from our town’s cement plant. It’s not a very welcoming sight when you know about the risks of cement plants and cancer. 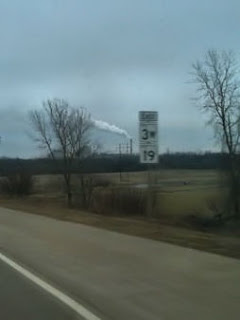 As a kid I lived a little less than a mile from the cement plant. Our house was always dusty, even though my mom was always cleaning. Even now living maybe 2.5 miles away I find the house is much dustier than when I lived outside of town.

But what is in that dust? Our cement plant burns tires. One thing that burning tires can release is dioxins.

“Dioxins are environmental pollutants. They have the dubious distinction of belonging to the “dirty dozen” – a group of dangerous chemicals known as persistent organic pollutants. Dioxins are of concern because of their highly toxic potential. Experiments have shown they affect a number of organs and systems. Once dioxins have entered the body, they endure a long time because of their chemical stability and their ability to be absorbed by fat tissue, where they are then stored in the body. Their half-life in the body is estimated to be seven to eleven years. In the environment, dioxins tend to accumulate in the food chain. The higher in the animal food chain one goes, the higher is the concentration of dioxins.”

And what are the health risks?

“Short-term exposure of humans to high levels of dioxins may result in skin lesions, such as chloracne and patchy darkening of the skin, and altered liver function. Long-term exposure is linked to impairment of the immune system, the developing nervous system, the endocrine system and reproductive functions. Chronic exposure of animals to dioxins has resulted in several types of cancer.”

The cement plant is classified as a “high-priority violators” by EPA. It was fined $321,000 in 2005 for violating its pollution limits more than 1,000 times in a single year!

So what does this have to do with cancer? Well many of the pollutants that the cement plant releases are carcinogens. Carcinogens that the people are breathing in every day. How much damage has already been done to my body and my families?

There is a bit of good news for those of us living near cement plants. The EPA will be cracking down on them because they don’t adhere to Clean Air Act mandates that require companies to use the “best technology available” to reduce pollution.

After doing all the research for this post I’m horrified. I told my husband I want to move and I’m sick to my stomach. I knew the pollution from this plant was bad, but I had no idea it was this bad. I hope the EPA will make cement plants clean up their act and stop pollution our cities and our bodies!

This post is for the Green Mom’s Carnival. This month’s topic is environmental links to cancer. Go to Nature Mom’s Blog on March 8th to read what the other members had to say on this topic.


Update: This post is being shared again. This post was written almost 6 years ago. I’ve learned a lot more since and there is more information out there now. For a more updated look check out my post on Moms Clean Air Force.

Welcome to my blog! My name is Lisa and I'm the Retro Housewife trying to live a greener life. I share my love of all things vintage, homemaking and green living here on the blog. To read more, click here.